Recall that a change request is a task you create in response to a reported software bug, hardware defect, or enhancement request.

As Change Requests are worked, they follow a workflow process. We use Statuses and Transitions to define the process, and define who can move the Change Request through its workflow steps.

We can use Cases as a simple example before moving on to the more robust workflow options with Change Requests.

A case can move from Open to Closed, and from Closed to Open.

Within each of those conditions, there are also a set of allowable statuses.

When a case is Open, its status can be changed, but it still remains in an Open condition.

Dovetail Agent supports the status/condition transition model for Change Requests, allowing organizations to define the specific workflow, and also enforce who is allowed to make which transitions.

For simplicity, the above diagram is really only showing changes between conditions.

In reality, the transitions are between statuses within conditions.

Within each of the conditions, there are also a set of allowable statuses.

When a CR is Open, its status can be changed, but it still remains in an Open condition. For example, a developer may change the CR status from Unconfirmed, then to Confirmed, then to Being Fixed.

Looking at the basic happy path workflow, we have this:

Now, we need to account for every possible path that we want to allow.

All of this means our diagram gets a lot more complex:

I warned you it looks complex! And that’s with less than a dozen total status values.

So why do we need this condition?

It allows us to define different transitions for creating a CR versus re-opening a CR or saying that the Fix Failed.

When creating a CR, I don’t want to start a new CR in an Open Condition with a status of Test Failed. That doesn’t make sense.

But I do want to be able to go from Fixed back to an Open Condition with a status of Test Failed.

Having the Null condition allows for defining transitions that support this type of workflow.

Unlike Case workflows, Change Request workflows allow us to have additional granularity when defining who can make a transition.

For example, perhaps we want to allow our developers to be able to move the CR from Confirmed to Being Fixed and then to Fixed.

When working Change Requests within the app, the Change Status menu item shows the allowed changes. 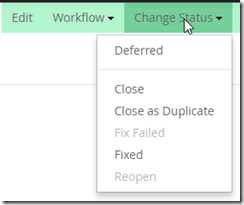 Only the allowable changes are enabled.

Which choices are enabled is determined by the current state of the CR, and the privileges of the current user.

As a system administrator, you can create, edit, and delete statuses and transitions.

You cannot create or edit conditions. These are hard-coded within the system.

Transitions are setup and managed within Dovetail Admin.

In the screenshot above, that transition is saying the CR can move from Fixed to Test Failed, and only QA Engineers and QA Managers can perform this transition.

It’s really easy to get carried away with defining your workflows, and before you know it, you have dozens of statuses, dozens of privilege classes, and hundreds of transitions.

This can make your sys admin duties much more complex and time-consuming than you probably want.

Refer back to the earlier diagram showing the Change Request Workflow including Status, and notice it’s complexity. And that’s with less than a dozen total status values.

So my advice would be to keep it as simple as possible, and really think about the on-going maintenance you’re taking on when adding new workflows.  I gave similar advice earlier when discussing business rules.

So that’s a brief overview of workflows and transitions for Change Requests.

Note that I didn’t cover normal workflow operations like Dispatch, Accept, Assign, etc. Those function the same way they do for other objects (cases, subcases, etc.), so I chose not to include that here.

Hopefully I’ve successfully illustrated what can be accomplished, and given fair warning about not introducing too much complexity.

And if you still have questions, or need some assistance with your workflows, feel free to reach out. This is an area we have tons of experience in, so we’d love to help.

Sign up to get this information delivered to your inbox.